Buying Brush Engineered (mtrn) into the close. It is a 2 beta name so we kept the position size small to start.

Significant progress has been made in resolving the start-up issues associated with the new beryllium facility, and, as noted previously, it is anticipated that the output of the plant will support demand levels through 2012. In addition, the initial steps in the integration of the EIS acquisition are complete and the previously announced shutdown and relocation of the microelectronic packaging operations is progressing on schedule. The costs associated with these initiatives are expected to be lower in the second half when comparing to the first half.

The global macroeconomic environment has become very unclear and uncertain. Visibility is short. The Company’s order entry had increased by approximately 12% in the first quarter of the year when compared to the fourth quarter of 2011. In the second quarter, order entry did exceed sales by approximately 7%, but after a good start, declined from first quarter levels, especially late in the quarter. Order entry has recently been inconsistent from week to week and the order rate is not as strong entering the second half of 2012 as the Company had previously anticipated.

Thus, while sales and earnings levels in the second half are still expected to be stronger than those of the first half, the Company is revising its earnings outlook for the full-year 2012. The Company now expects the earnings level of the second half to be in the range of $0.82 to $0.92 per share, which would bring the full year to the range of $1.50 to $1.60 per share from the previously announced range of $1.95 to $2.10 per share. This full-year range includes up to $0.27 per share of costs related to the aforementioned initiatives.

Richard J. Hipple, Chairman, President and CEO, stated, “Despite difficult global economic conditions, I am encouraged with our increasing quarter-to-quarter earnings improvement from the fourth quarter of 2011 and our expectation that our second half of 2012 earnings and sales will be stronger than the first half. Important to the ongoing improvement is the progress with the start-up of the new beryllium pebble plant, the successful relocation of the microelectronic packaging operations to Singapore and the success of our new product and cost reduction initiatives. Our confidence in the long-term growth of Materion is evidenced by the initiation of a dividend to our shareholders. Although I remain cautious about the volatility in global economic conditions, I am confident that we are well positioned in fundamentally strong secular growth markets with products that are critical to our customers’ success, positioning us for long-term future growth.” 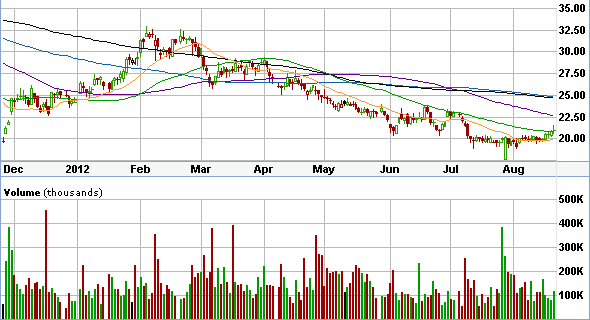 Wait for a break above the 50 day moving average (green line). That will signal the trend reversal.