Markets got a huge move today on news from Europe stating that they have enacted a bond buyback program much similar to the U.S. in the sense that they are both intended to act as backstop should those economies slow. This is a huge announcement in our opinion. We were not permabulls just hoping for qe3 like others supposedly were. We do believe that even with qe3 problems will still remain.

The question is, what does the bond buyback program for the U.S. and Europe mean, and what problems would still remain? We think that while companies aren’t hiring because of higher tax rates and sky rocketing healthcare costs, the main reason behind the unemployment rate is due to global uncertainty. Even Europe said last week that the main problem they face now is uncertainty. We all know Europe is slow but China, the main driver of economic growth in recent years, is now seeing a slowdown  as well because their second largest customer (Europe) is not demanding their product. This, in turn, has contributed to Australia’s housing market collapsing because they are the largest supplier of raw materials to China, a domino effect indeed. The cold from the U.S. has contaminated the rest of the world no doubt.

But the banks in the U.S., the culprit of the crash in 2007, are now thriving and housing is bottoming out. (Usually takes 5 years for a correction to end and it has been exactly 6 years since housing prices peaked in 2006). What housing really needs are buyers, but people won’t buy until they have jobs. We don’t have jobs because of uncertainty. Now that Europe and the U.S. have stabilized, seemingly, the rest of the world should follow suit and start growing again- albeit at a slow pace. So, it is no wonder why the markets are up 200+ points today and counting. 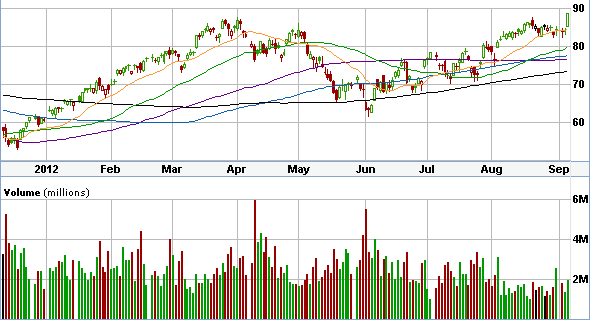 Above all moving averages. Bullish. Formed a bull flag recently on the 20 as it now turns out because we got a huge move up today to new highs on the European bond buyback program. Breaks 3 year resistance with new highs, and market breadth is good, signalling a broad based rally, (bullish, not just apple leading up the indexes) as all stocks are up significantly in our portfolio today.