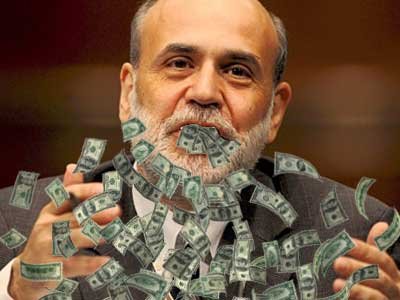 The dollar has suffered ever since the Fed’s QE3 announcement last week. Since printing all of that money leads to an over-supply of dollars, inflation rises and purchasing power diminishes. With this debasement of our currency, stocks should benefit. Companies will reap the profits overseas from favorable exchange rates.

Despite this being said, the dollar has now reached support. If the inverse relationship with the stock market and dollar is true, then the markets should be due for more of a pullback. The dollar testing support today is big. Here is a chart of the dollar. (uup) 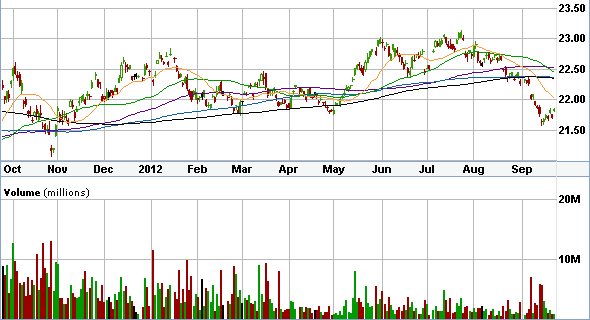 Additional reading from Yahoo Finance:
By Rocky White
Earlier this month, the Federal Reserve announced a third round of quantitative easing. Stocks immediately jumped — along with gold — while bonds and the dollar fell. What can we expect going forward?

Let’s take a look at the prior two rounds of quantitative easing to see which sectors and assets benefited (and suffered) from the Fed’s past actions.

Rounds One and Two:Below is a chart beginning in August 2008 and showing returns for stocks and ETFs tracking gold (GLD), the dollar (UUP), and bonds (TLT). I wanted to get a feel for how these investments have done during the first couple of QE rounds. The shaded sections illustrate the periods from the announce date of QE through the end of QE. I like to compare how the assets did during times of QE compared to times in-between QE.

I thought bonds were interesting as measured by the iShares Barclays 20+ Year Treasury Bond Fund (TLT). Bonds spiked at the beginning of the first round of QE and moved downward until it was over. Between the first and second QE periods, bonds moved significantly higher until right before the second round of QE — at which point they struggled. Between rounds two and three, bonds posted huge gains. Perhaps the rally is over now that QE has started again?

Gold had been very strong throughout the first two rounds of QE and between rounds one and two. However, after QE2, you can see gold became quite volatile but still posted a decent gain between the two rounds. Gold spiked on the news of QE3. Gold bugs would love to see the latest round of quantitative easing bring back the orderly uptrend that occurred during rounds one and two.

What Happened Six Months Later? This table might give you an idea on what to expect out of certain sectors over the next six months. It shows how certain ETFs representing different sectors fared in the six months after the announcement of QEs one and two.

The table is sorted by the average of the two columns. The coal sector — as measured by the Market Vectors Coal ETF (KOL) — has been the best performer. It returned 86% in the six months after QE1 was announced and 19% after QE2. As you might expect, metals, materials, and gold have additionally done quite well. Retailing is another interesting sector near the top.

At the bottom of the list, we see the dollar and bonds. Both saw losses initially after the announcement of QE1 and QE2.