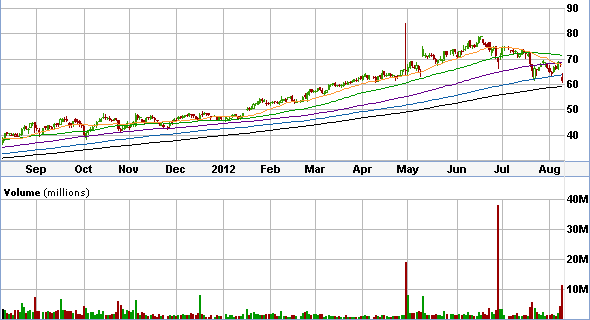 I always wanted to buy Monster near its old highs. It just seemed like it would go up forever. I mean, I remember the days when monster (mnst) energy drinks used to be handed-out by the truckload free as promotionals. Now they’re everywhere. It is actually owned by Hansen natural who changed their name to Monster. “Coca-Cola Co. (KO) was in talks to buy the beverage drinks company earlier this year, until someone brought the discussions public and Monster’s shares jumped 20%- tacking on a couple billion in market capitalization”. Now it is cheap again and at strong support. We might look to buy this name tomorrow for the portfolio. Feel free to comment.

Tess Stynes wrote “Monster Beverage Corp.’s (MNST) second-quarter earnings rose 30% as the energy-drink company continued to post strong sales growth. However, shares fell 13% to $59 in after-hours trading as earnings and revenue missed analysts’ expectations.”
The company’s shares have soared in recent years amid strong growth in the energy-drinks category. The stock through Wednesday’s close is up 47% so far this year despite wavering in recent months amid concerns about convenience-stores sales trends. The stock was added to the Standard & Poor’s 500-stock index in late June, replacing the former Sara Lee Corp.
The company, which changed its name to Monster Beverage from Hansen Natural Corp. in January, also has been expanding abroad, including rollouts in Hong Kong, Macau, Japan and Ecuador during the period. Monster Beverage reported a profit of $109.8 million, or 59 cents a share, up from $84.2 million, or 45 cents a share, a year earlier.”
Revenue increased 28% percent to $592.6 million.
Analysts polled by Thomson Reuters most recently projected earnings of 61 cents on revenue of $596 million.
Gross margin fell to 51.8% from 52.8%.
Volume grew 30%.