The frac sand/silica sand mining sector has come a long way in the last 6 months, and sand stocks in the portfolio are starting to reflect that.

Some holdings are up over 100% from the lows, and quarterly earnings from these names are confirming that price action. 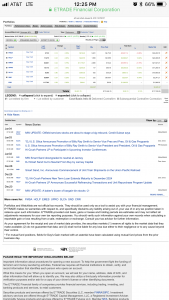 Adding more to UPRO, and frac sand plays, on any significant dips.

However, I believe the frac sand mining space is still vastly undervalued.

As a result, I, and the frac sand companies themselves, will be buying these stocks hand over fist, now while collecting a dividend as we wait, I might add, until this shamefully misunderstood, ‘oversupply of brown sand,’ situation goes away for good.

(Speaking of dividends and company buybacks… now, just announced, even Emerge $EMES is cleared for their buyback and dividend program. That’s a huge vote of confidence from our core holding, and points to a strong business ahead.)

So, let me tell you WHY we are all still bullish about the frac sand industry, besides the reasons stated in previous articles (link here):

Understand this, please, analysts at Goldman Sachs and Third Point, (who single-handedly crashed the sand sector with their comments about oversupply).

The big 4 couldn’t service the extra demand anyway. Obviously this is necessary for the drilling industry since they get to drill and frac more wells now, without delay.

Earnings will be less lumpy. More jobs will be created worldwide.

Perhaps bears think new supply of brown is harmful because, it will hurt pricing? MAYBE it will hurt 100 mesh pricing.

Demand looks strong in ALL basins, even without the recent rise in oil prices. I wouldn’t bet on it.

Plus, every new mine will come on incrementally- that means one at a time. I don’t see pricing issues locally or nationally that way.

It is hard to flood the national market when supply comes on one at a time, especially when some of these brown mines announced are already sold out, even before production begins.

Brown sand CAN reach the mid-continent area with profitable margins, which could actually help alleviate would-be oversupply issues in the Permian.

However, most of these new mines have no rail to leave Texas anyway, and trucks can only go so far.

So, how can those companies flood the national/international market with cheap 100 mesh brown sand without rail?

If you add rail to brown, it defeats the purpose of using brown in the first place because it adds the rail cost right back into the price; making it better to use white because of its better quality and proximity.

Speaking of Northen White and quality…

2018 has arrived, and the wells are getting deeper. So, you will need more coarse grades and NORTHERN WHITE sand because their crush strength is higher, around 9-10k vs Brown’s 6-8k.

In other words, you need white, and the big 4’s RCS (Resin Coated Sand) abilities (which they dominate almost the entire RCS market) if you want to frac deeper wells, especially in basins outside of the Permian.

Tell me, in 2-3 years, when all of the good wells have been cherry picked for good economics, who are the drillers going to turn to for stronger sand?

Answer: The big 4. They have northern white, coarse grades, R.C. sand, and can deliver to ALL basins.

Throw in, last-mile container providers in order to meet new 2018 OSHA regulations, which the big 4 also have.

This is, slight tangent here, also why I prefer the big 4’s stocks over Solaris, $SOI.

HCLP and SLCA, for example, will have more revenue coming from their last-mile containers alone, than Solaris.

The big 4’s revenues are in the hundreds of millions per quarter, while Solaris’s only makes around 30-40 million revenue per quarter.

Yet SOI’s stock just doubled, and no one includes last-mile revenue multiples into valuations of the big 4 mining stocks.

Just throwing this figure out for thought, U.S. Silica makes $1 million per box (using Sand Box) and soon plans to target 100 mil a year out of those.

Big dislocation there. Think of how SLCA and HCLP will dominate the last-mile since they have RAIL, all types of sand (brown and white), and more efficient containers than anyone, even the siloh-systems for Solaris.

Back to the Discussion

The reasons listed above are a summary of prior discussions on frac sand, and speak to the dominance of the big four alone.

But, I haven’t gotten to the good part yet, and the reasons for this article.

As I alluded to earlier in the headline, more brown sand just makes the big 4 stronger.

Not only does more brown sand actually mean more easy profits for the big 4 themselves (each have at least one brown sand mine now), but it also backs the smaller brown guys further into a corner, tightening the screws on their future profits.

Remember our last article here on the big 4 takeover, and the subsequent bifurcation of the sand market, which I’m pleased to say is happening ahead of schedule. (U.S. Silica bought Mississippi Sand shortly after).

Allow the small guys to build as many brown sand mines as possible, and defeat themselves in the end since:

It is no surprise that most brown players are using trucks instead of rail to compete with one another, like Mammoth Energy (TUSK) and Preferred Sands, because it saves about $50 per ton.

But, reducing your competition in rail is key to dominating North America.

So, competitors like Preferred Sands and Mammoth using trucks is ultimately a positive for the big 4, since the big 4 have trucks AND rail.

Yes. Preferred Sands is supposedly selling ALL of their white sand mines and rail cars. They are going purely into the Permian.

At first glance, this announcement of leaving rails and white scared me; like white was dead, and Preferred outsmarted the Big 4 on rail car storage costs that tend to be cumbersome in down markets.

But, then I saw how the new scenario made perfect sense for both sides.

Preferred gets to solve their debt problems and focus on their notable 3 brown sand mines, while the big 4 become solidified as the dominant, NATIONAL/International barge/rail players.

The big 4 public players have less competition to worry about now vs. the private big 4.

(Actually now 2, since Unimin merged with Fairmount, and Preferred Sands is out of the national picture, preferring to stay local, no pun intended).

Let’s not forget that other basins in North America are beginning to heat up, too, as the Permian gets over-crowded, and oil prices continue to climb.

So, I applaud the fact that some brown players are lowering costs of operations by using trucks instead of rail.

The big 4 are doing the same thing in the Permian. In fact, HCLP and SLCA have better roads for trucking than others to allow for less bottlenecks.

But, now only the big 4 will be able to service the OTHER half of North American frac sand demand with RAIL and NORTHERN WHITE, making them the real winners in the end.

2.) We already mentioned wells are getting deeper, and you need white or RCS to get the job done.

Well, did it ever occur to anyone that some of these smaller guys (with inferior sand and limited grades) might even be too late to the party?

You need higher quality white AND coarse grades to frac current wells. But, the deeper the wells get, drillers will require even more coarse grades, white, and RCS.

(White has ALL coarse grades, brown does NOT; brown only has 2 grade types abundantly available 40/70, and 100 mesh. Wish Dan Loeb knew this point earlier).

3.) Last but not least, you avoid the costs and risks of building out these brown sand mines by letting other guys DO IT FOR YOU.

So, again, let the small brown players, who have no rail, white sand, or last-mile capabilities to the rest of the continent, FINANCE & BUILD as many state of the art brown sand mines as they can.

Everyone will make great money when times are good, and no one will mind divvying up the pie yet, as there is not even enough sand available to service total demand anyway.

But, if and when times get bad, & oil prices fall for an extended period, then the smaller brown players will all of a sudden face a different set of dilemmas:

In my opinion, a golden parachute from a bigger player seems much more attractive than a showdown at the OK Corral everyday in the literal Wild West of frac sand, since new entrants won’t be able to compete with the established smaller brown players, or the big 4’s lower costs, last-mile, and product mix/RCS abilities for the more complicated wells.

Needless to say, if new small brown guys CAN end up competing at a high level with everyone else, big 4 and other small brown miners alike, then everyone wins anyway.

But, in the meantime, more brown sand announcements just play right into the big 4’s hands.

They will make easy money for the next 2-3 years mining high-margin brown sand on the best contracts, while the competition is just getting going, AND they will get the pick of the litter of the smaller brown mines- if & when the next downturn ensues.

(Thankfully now, the big 4 will have the cash to acquire someone or be acquired, due to their new & improved, deleveraged balance sheets).

Like I said earlier, I’m happy to wait & collect a dividend while the big four rake in profits from multi-year take or pay contracts, pay down their debt with increased fixed costs absorption advantages (all rail cars are out of storage), and navigate through the distractions coming from questionable analysts, and Dan Loeb’s outfit of quant bandits.

Now, if we go any lower from these single digits… with these profits, new revenue streams, and minimal debt… then the buyback programs and yield support should act as a floor for our stocks.

BUT, if we go any lower than that, then look for additional M&A activity in the space (which makes me even more bullish on frac sand).

I am confident in the frac sand space for the above reasons, and these recent price moves from the lows are just the beginning. Additional sand announcements only play into the big 4’s hands.

We will look to add more to positions on any dip, assuming the overall market/ S&P 500 holds up (sold half of UPRO at year end, and went even more overweight into energy).

The way I see it, the only thing standing in our way is a technology change in proppants, which high up executives at a recent frac sand conference looked me in the eye and personally told me, does not exist.

So, this closing line might be a bit generic, but piling into frac sand here, with all of the recent developments stated above, is possibly the best investment opportunity I have ever seen in my 15 years of investing. 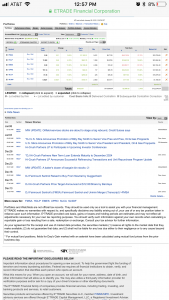 EMES and SLSDF are both up over 10% to start the week. Selling CRR on strength to raise cash and focus on primary winners.