Most of our silica sand/frack sand plays are firmly in the green today, as our rebalancing efforts near the lows are already starting to payoff; Fairmount (FMSA) is up 6% as I write this.

The vertically integrated fracker, Mammoth Energy (TUSK), is getting a decent bounce as well.

WHAT the heck happened?

The double we got in EMES a few months ago completely gave up its gains- FOR NO REASON.  Issues were on oversupply of new brown sand, idled white sand from the winter, and new greenfield/brownfield expansions coming online.

Dan Loebe, an infamous hedge fund manager (but highly respectable, look him up), even said sand stocks were going to ZERO, for these bearish reasons stated above.

I know how Loebe thinks, some, if he was really telling the truth in his interview. He said, basically, that he’s a value investor (…oversupply would lead him to the conclusion that sand stocks are OVERVALUED).

He’s also very religious. Not only in a spiritual way (Jewish), but specifically when referring to his conviction.

He believes in his ideas and has total conviction in them, he says, effectively putting his billions where his mouth is.

In other words, this guy Loebe is stubborn, and won’t exactly go gently into the night (i.e., like David vs. Goliath).

However, that leaked client report from Loebe to his investors came out on the 29th of April; Frack Sand companies reported in May. 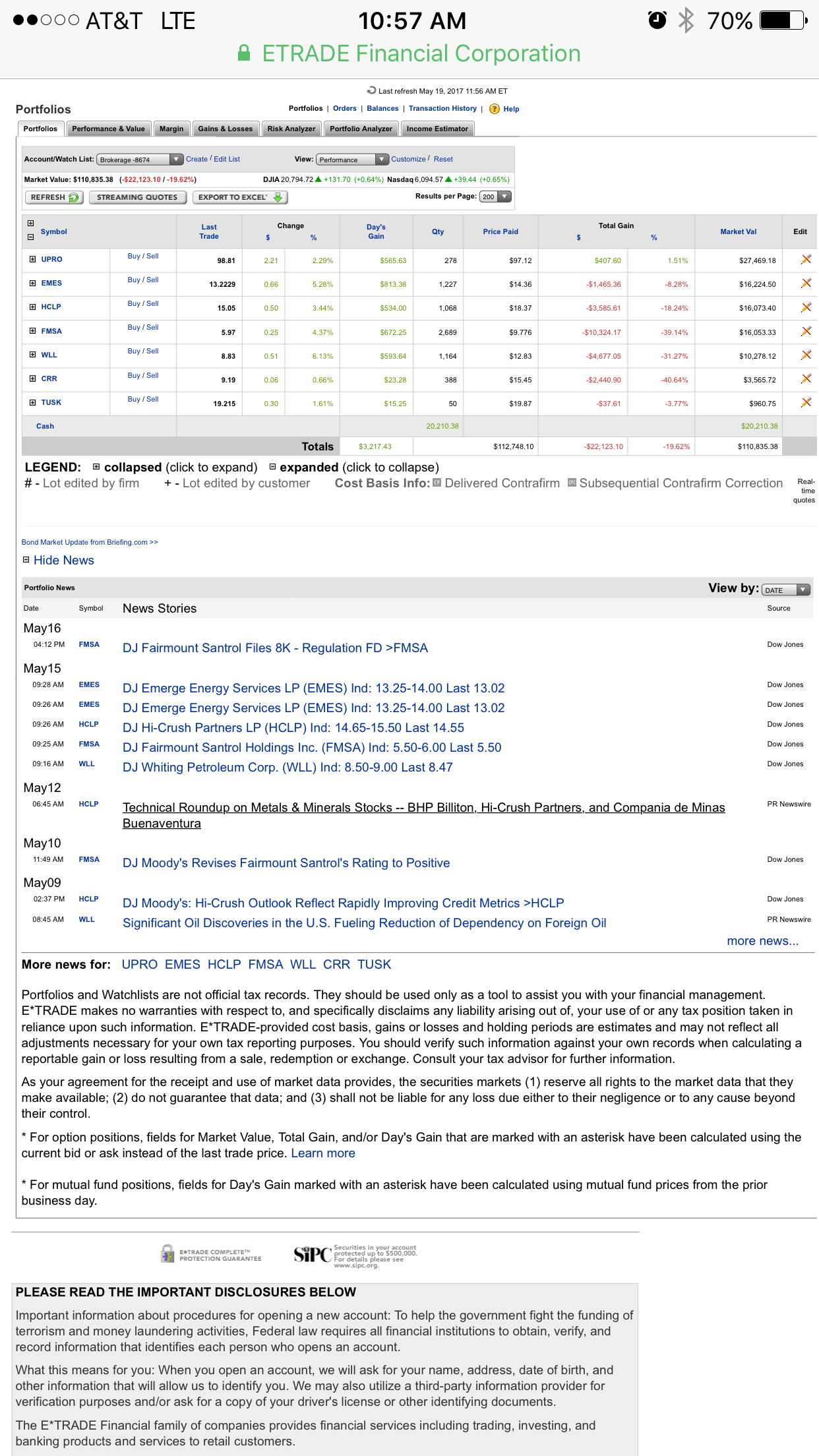 Back to the facts

The managers took EXTRA time to add color to the oversupply worries, and correct some misconceptions out there…directly replying to Loebe (seemingly) and the other bears mauling these frack sand stocks.

Misconceptions out there: Oversupply of brown (Brady) sand, idled white (Ottowa) sand, greenfield/brownfield expansions, and drillers going to less proppant per well and getting better results…are the main concerns some investors have. Let me assuage your fears.

1.) Oversupply of brown (Brady) sand: Brown sand only accounts for 15% of the total frac sand market. These brown sand miners, who are too small and based in Texas, are not good for the drilling operator’s equipment longterm, and don’t reach other basins viably in the U.S. besides the Permian, according to Mammoth’s recent conference call.

I am assuming the reason here is because those TX companies are so small that they don’t have the logistics networks, like the big sand miners, to reach the other basins. I even called a bunch in Texas, recently, and most only had annual revenues of under $1 million…small potatoes.

2.) Idled white (Ottawa) sand from the winter shutdown is coming back online: These guys are marginal players, high cost producers, and don’t have the logistics networks/lead time like the big four sand companies have to compete for customer’s orders. Plus, we NEED the extra sand…we need ALL WE CAN GET.

The market is tight out there folks. Oil drillers need SURETY of supply for their mega drilling programs, where they are using over 2,000-3,000 lbs/sq ft to drill wells…going 1-2 MILES out horizontally, wow… or face future reductions in oil production/profits.

3.) Greenfield/brownfield expansions: Okay, I get where the angst comes from regarding new mines being developed (greenfield), and existing mines being expanded (brownfield), and these events leading to an “oversupply situation”.

Well, most of the companies just reiterated on their latest earnings calls, in May, that they have already evaluated most mines across the U.S., even 3 times over in some cases, and have just not found anymore areas that are VIABLE in ALL ASPECTS; such as available rail accessibility, proper grade/product mix, reserve capacity, etc.

Demand is currently at around 100 mil tons per year (and set to rise each year until 2020). So, these statistics imply that supply will be tight for the forseeable future, EVEN WITH new sand capacity being brought online, because the product mix and location to wellhead/basin really affects where the sand can REALISITICALLY be shipped to.

In short, since existing, undeveloped greenfield opportunities might not have ALL of the aspects needed to serve driller’s needs (stated above), frack sand supply, pricing, and barriers to entry will remain high.

4.) Drillers using less proppant/sand: Yes, some operators are using less sand per well, like Continental (CLR) and a few others. But, that is only in areas with high pressure and good flow rates, most of which account for only a small portion of total shale reserves in the U.S.

Feel better? I do. Although, you wouldn’t know it judging by Emerge’s chart. Look at that. We caught a double from $12-$24, but then lost it ALL. However, the chart looks attractive here. 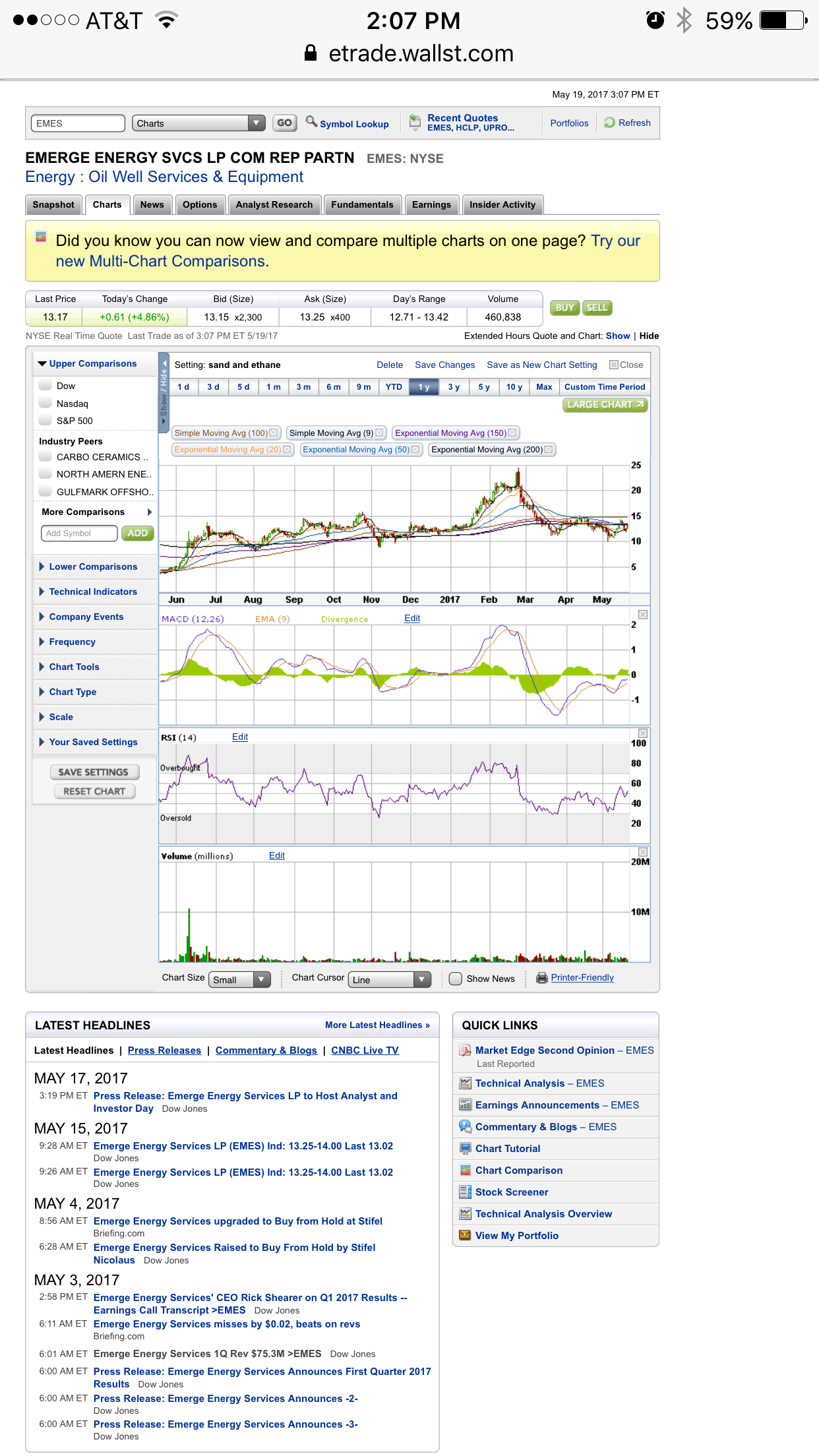 Emerge Energy (EMES), and other respective sand names, are consolidating at support, popping above their 9 day mavgs and holding (black line looping underneath), while their RSI’s still have room to run before becoming overbought. Bullish sign.

Now we are looking constructive on the charts again in frack sand stocks, and I think it is the time to jump back in or rebalance, if you haven’t already (Charts with annotations to follow).

The strong fundamental picture forming for these companies are becoming too much for the bears (and LOEBE) to handle, which is causing them to cover their short positions today.

Look, we all know that if oil stays between $45-$50, the sand miners and services companies stand to reap the rewards.

So, hopefully the short squeeze we are seeing today by the bears will, ultimately, act as the starting point to proving my bullish thesis on sand correct, and resume the sector’s uptrend.