The S&P 500 is finding support on the 75 day moving average (orange line) and is now digesting a slew of companies’ earnings released for the latest quarter. Truthfully, earnings have been solid with almost 60% beating- pretty much in-line with historical standards. So why aren’t we coming back faster? Beats me. Apparently, companies’ estimates are too high and need to come back down in order to be priced properly for a slowing, uncertain global environment. If you are long-term however, these pullbacks represent opportunities. As a result, we have issued our new price targets for the following core holdings in our portfolio. 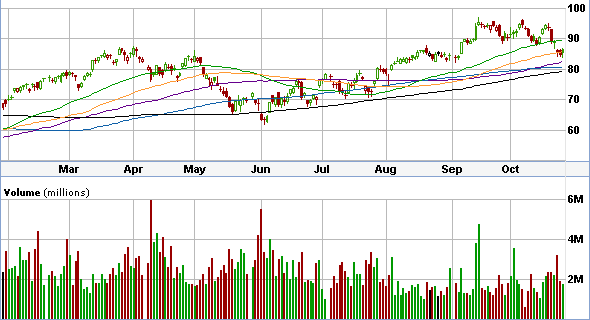 S&P 500- Consolidating along the 75 day moving average (orange line). How this goes, so will our core holdings in the portfolio. As a result, to be safe, we have widened our entry points in order to be able to stay long and not blow our wad early.

Caterpillar Inc.’s (CAT) third-quarter earnings rose 49%, but the company lowered its sales and profit forecasts for 2012, as inventories of unsold construction and mining machinery collide with the company’s rapid expansion of production in recent years.

Transocean Ltd. RIG) shares declined 1%. The offshore drilling company announced Wednesday the resignation of its general counsel, “not a welcome headline given the company’s ongoing legal issues particularly in the U.S.” with the Gulf of Mexico oil spill trial about three months out, analysts at Simmons & Co said in a note.

(No earnings for etf’s)