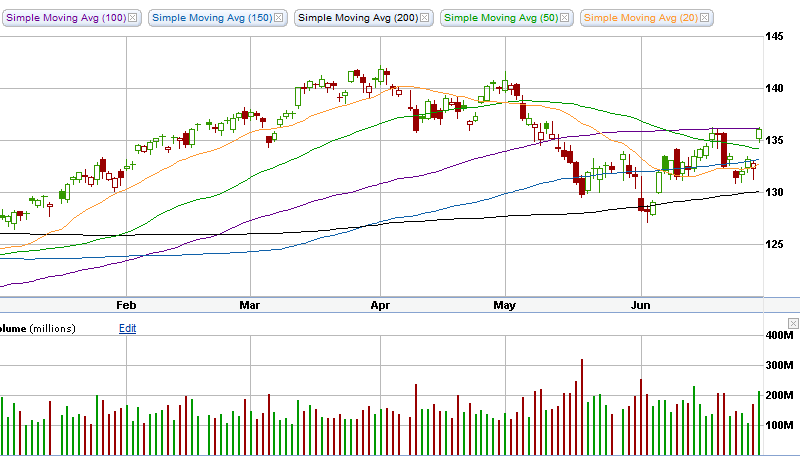 On the fundamental side of things Jim Cramer wrote, “It was another week dominated by headlines from Europe and continued concerns about the global economic slowdown. The U.S. markets were down for the week by the end of the day Thursday but rallied sharply after better-than-expected news from the E.U. Summit. The group of 17 European leaders agreed to bold moves to restore confidence to its currency union and made progress on setting up a common banking regulatory structure whereby the European Stability Mechanism will be able to recapitalize banks.

This is the first step toward a FDIC-type of system, which is what we’ve needed to see. Also, the group did officially set up the 120 billion euro stimulus package, which was expected. In general, many details still need to be ironed out, and it could take one to three years to set up, but this is a solid step in the right direction for this region.

So with Europe somewhat stabilized (for now), the attention goes back to the U.S., where the economic data continue to slow (1.5-1.8% GDP growth) and to earnings, which have had a rough start, with disappointing results from Nike (NKE:NYSE), Bed Bath & Beyond (BBBY:Nasdaq), Red Hat (RHT:NYSE) and Ford (F:NYSE). Research In Motion (RIMM:Nasdaq) also disappointed, but its issues are more company-specific in our view.

Overall, earnings expectations are low headed into second- quarter results, so there is a low hurdle rate — consensus is for a decline of 1.8% in earnings and an increase of 2.7% in revenue for the S&P 500 companies. Valuations remain very attractive at 11.6x forward estimates, and dividends continue to be the bright spot, with 201 companies raising them so far this year. But as is usually the case, the earnings guidance will be most important, and we expect the tone to be muted, given the global economic slowdown.

Next week will be a busy one on the economic calendar both here and around the world. We will get several U.S. manufacturing reports (purchasing managers’ index/Institute for Supply Management/factory orders), but the June non-farm payroll report will be the most carefully watched. China releases its PMI and the HSBC PMI over the weekend, and several PMIs come out from Europe.

Once again, there is speculation that the Chinese government will ease its bank lending rates over the weekend. Whether it happens this weekend or not, we do expect China to continue to take action in order to ensure a soft economic landing. And in general, we expect continued easy monetary policy here in the States and around the world. And for this reason, we own some of the cyclicals such as energy, industrials and materials (Ensco, Devon Energy, Eaton, General Electric, DuPont). That said, our high cash position and defensive positions (such as General Mills, Kraft Foods, CVS Caremark) are equally as important in enabling us to stay diversified” (Jim Cramer).