When the market has a big run, it is prudent to take profits and rebalance your portfolio. However, it’s also wise to treat yourself occasionally just so that you don’t forget why you started. Eventually, an electronic bank account doesn’t feel real unless you splurge a little bit. So, I am buying a new watch that I’ve had my eyes on for a while. It put a sizeable dent in my portfolio’s market value, but I needed it. 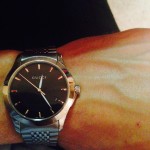 Okay, so I’m not a hand model. Anyway, with that out of the way, let’s look ahead to the coming week in the markets. We got the S&P 500 wanting to climb higher, but is nearing overbought territory (bearish). We also have numbers on the job front coming in weak (bearish), and sluggish data coming out of Europe (bearish). China is not great either (neutral).

On the other hand, stocks are trading at a fair value (17x earnings, bullish), Russia has supposedly reached a cease-fire agreement with Ukraine (bullish), and Europe is getting aggressive on their fiscal policy, cutting interest rates last week (bullish).

These bullish (positive) events balance out the negatives (or the bearish signs) and bode well for stocks as interest rates will be so low (with the ECB cutting rates), that people will be searching for yield somewhere else other than bonds or savings; Stocks are where they will continue to find it. 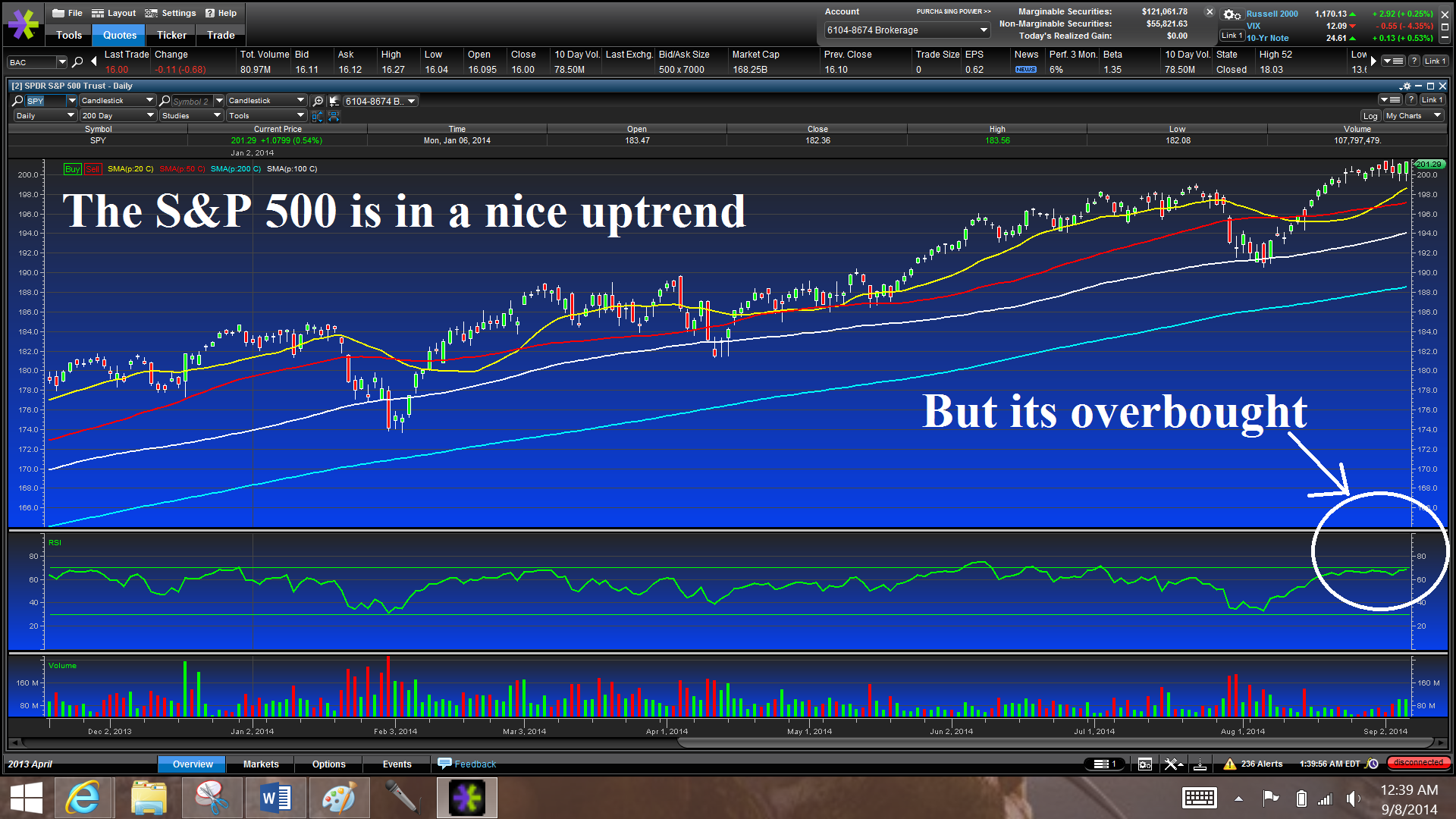 Now, as you can see by the chart above, the market (S&P 500) is in a nice uptrend, but is nearing overbought territory. The SPY is above all moving averages (bullish) and is consolidating in a healthy fashion (bullish) after having its big run higher to $201.00.

Despite being overbought short-term, I still want to be a buyer of certain stocks working here (tech, finance, and industrials) since the fundamentals in our economy remain strong (albeit somewhat disappointing lately).

Even though the S&P 500’s chart is at its highs, how many times have I documented the same looking chart…for the past 5 years, and feared we would fall but never did? You have to be buying this market folks, even though it never corrects like you want it to. Just use your stop losses.

We recently added Twitter (TWTR) and Bank of Amercia (BAC) to the portfolio (social media/tech and finance). However, I still have some cash I’d like to use on another tech name in Microsoft (MSFT). This name needs no introducing. 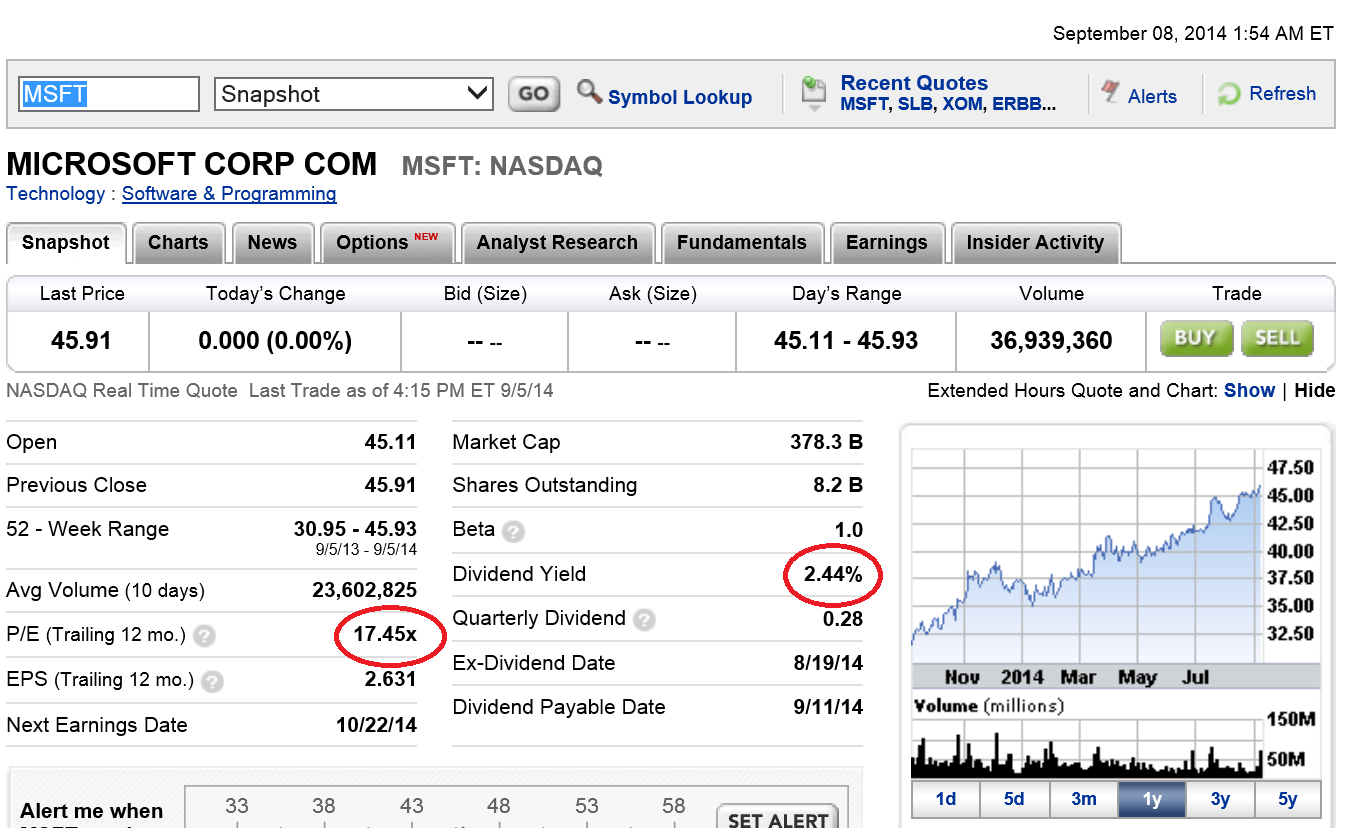 Trading at only 17x earnings, and sporting nearly a 3% dividend, MSFT is displaying attractive fundamentals. We all know that its balance sheet is fortress-like, and it has more cash flow than it knows what to do with (since it’s such a mature company).

That’s exactly the problem though, right? MSFT is TOO mature. PC’s are becoming extinct and Windows is a thing of the past, if you use a Mac or tablet of some kind. Wrong.

It has the Xbox, Surface, (what I’m using to write this article) and its new Windows phone. Plenty of catalysts. Plus, its chart is a beauty. I will look to add this best of breed technology name to the portfolio on any pullback. Be prepared for when I issue the proper buy/sell alerts. Regards. 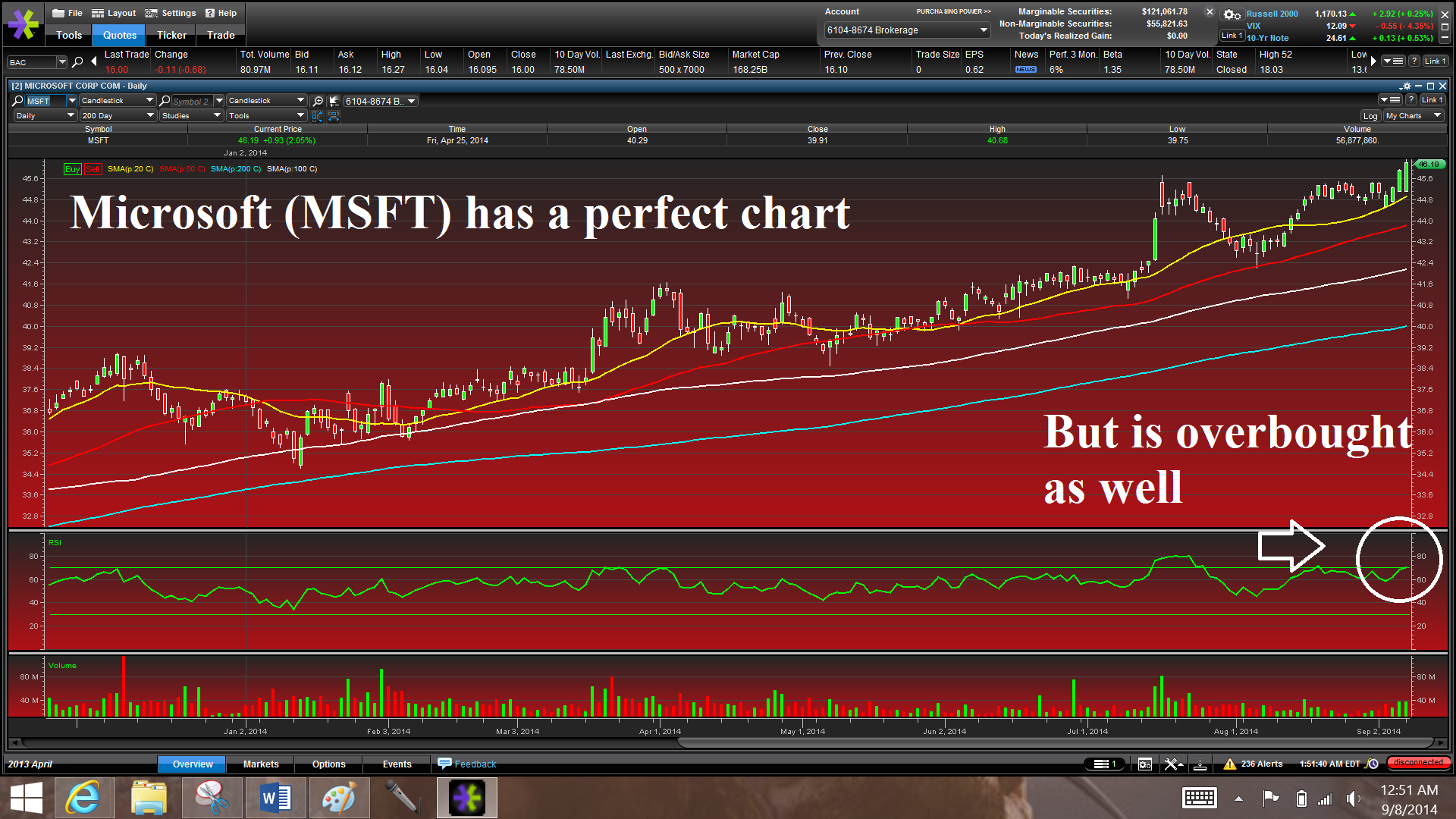