Markets have had a big run to start the new year in 2013. Stocks are at multi- year highs and sentiment is improving by the day. $17 billion worth of funds have come into equity markets this week- a record high since 2008. So, clearly the picture is improving; It is just important to note that the vix is at new lows and stocks could be considered over-valued at these levels. With that being said, certain areas look good to put money to work in. We have just been waiting for a proper entry point before we get too aggressive again. We have been waiting for the opportune time to send out the alerts but just haven’t gotten there yet. We are licking our chops at the moment- salivating for the chance.

Here is the S&P 500 above (UPRO 3X ETF). Obviously we are at multi- year highs which gives investors an excuse to worry. The fiscal issues in Congress are still not resolved and a prolonged delay could downgrade our debt rating which could tip us into a rescession. I don’t see how this is possible but it is the issue that is front and center. Trading sentiment will be overshadowed by this, as a result, until it is out of the way. Expect volatility to persist. A pullback to 90, or the 20 day moving average, should be bought.

Now BANR (above) is one of our favorites among the portfolio. With Wells Fargo reporting a solid number today, BANR and other regional banks tied to housing should benefit as well. Yes, Wells Fargo’s net interest margins were pressured implying that, until people take out more loans to buy houses or until interest rates rise, banks will continue to suffer. I, as well as others, believe that both loans and interest rates going into 2014 will rise. So, this pullback to the 50 today should be bought with a stop below.

Don’t forget that BANR has been around since the 1800’s and has survived the tough times. They did this by staying conservative and only loaning to those who were less likely to default. This conservative name is capable of taking off to the moon, though. Just look at its performance in 2010.

Here is just the one minute chart today for BANR bank. Once it suprpassed the 50% retracement level, and held, it was off to the races. A good intra-day entry point if you ask me. (There’s a tongue twister)

Conclusion: We like equity markets for 2013. Improving sentiment, a growing economy, and interest rates on the rise will bode well for stocks as there is really no other place to get a decent return for your money. Bonds? No. CD’s? No. You have to go to stocks eventually. Prudence and stock picking prowess will be key. (Isn’t it always?) 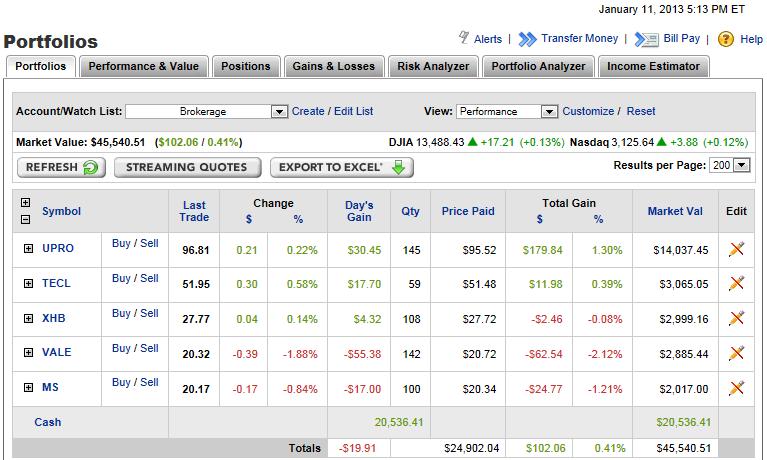